Cheers! Lets raise one to summer. Enjoyed the longest day of the year and hunkered down for our first tornado watch of the season (we had like 1 in 4 decades, now we have them every year), I thought it'd be a good time to check in about what THE RATIONALES have coming up for the next little while.

We are taking it a bit easy on Boston shows in the coming months - we need to get geared up for our next record and so decided to play a couple of big shows rather than lots of times....

If you haven't seen us lately we've revamped our set quite a bit - playing a bunch of unrecorded songs and really having a great time playing. Our latest single "ALL THE WHILE" is a summer song if ever there was one. (Love by porchlight, among other things...) and in a few short weeks we'll drop our new single "TAKE A RIDE" another burner about roads and humid nights, all the good stuff. 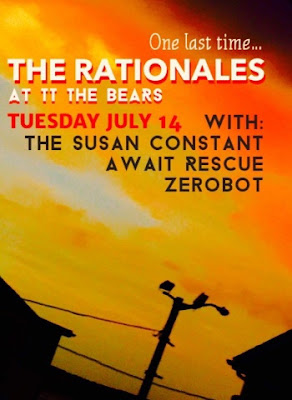 Check out these and other new tunes (READY TO GO is another new favorite) at our upcoming show JULY 14 at T.T. The Bear's Place. Sadly as you know TTs is closing its doors a mere two weeks after our show and we couldn't be more upset to be losing what has truly been our Boston area home-base. From our first EP release show for THE GOING AND THE GONE in 2008, to our semi's run in the 2012 RUMBLE, -- and the other two dozen times we've played there... we love it like its not possible to explain. We want to do it proud and plan to play a send off show for the ages. Also on the bill are the amazing Zerobot, The Susan Constant, and Await Rescue. It's-a gunna be a good'un.

Then in August we return to Allston for a show with our long-time pals MY OWN WORST ENEMY. It'll be Bob Colby's Birthday show and we know it'll be a fun night. That one is on August 8.
Posted by DaveM at 6:11 PM