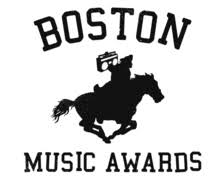 Founded in 1987, The Boston Music Awards is an annual set of music awards that showcase the very best talent in the Massachusetts area.

The nominations come from a pool of Boston Music Scene insiders, but the voting is up to you.

Please go to http://bostonmusicawards.com/vote and lend us your vote! We would certainly appreciate it!

The 2017 Boston Music Awards will take place at House of Blues on December 7th.
Posted by DaveM at 3:45 PM